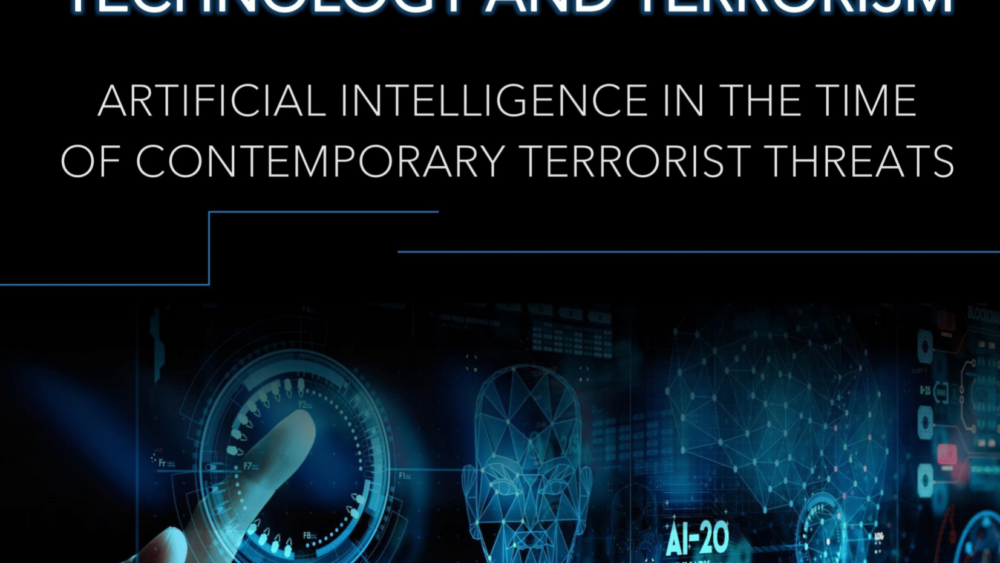 Technology and terrorism: Artificial Intelligence in the time of contemporary terrorist threats

Technological breakthroughs are responsible for much of mankind’s progress across history, revolutionising both peaceful lifestyles and armed conflicts across the centuries. Advanced technologies have also led to complete reconstructions of how states interact from one another, with the advent of nuclear weapons being one of many supporting examples. Presently, a novel set of security challenges focused on information, hybrid warfare and the embedding of technology within society, especially with artificial intelligence (AI), being used not only for the sake of mankind’s progress but also for the forwarding of one’s own strategic agenda over another’s.

The report will begin by exploring the definitions and impacts of artificial intelligence. Among its countless benefits, a special focus will be placed on the retail, healthcare and military sectors, while the challenges posed by establishing an ethical conduct of research and its drawback on employment will be focused on in equal measure. Afterwards, the distinctive efforts made by the three competing world powers (USA, China, and Russia) to overtake one another in the new, apparent arms race for AI dominance will be analysed, with the three leading figures seeking to harness its potential for increasing both economic and military power.

The ubiquitous integration of technology in communities, and its exploitation by malign actors, places the concept of ‘hybrid threats’ in the spotlight, and the report will explore their elusive nature and strategies as part of a revolutionary type of warfare that involves both conventional, unconventional, and contemporary tactics. Among these threats, terrorist organisations will receive an equal amount of attention. After establishing an analytical framework, the following section will delve into the motivations and strategic advantages terrorists would have in using AI-supported technologies, supplied or requisitioned, with examples ranging from their tactical potential to nullify established defences at critical locations, towards using them for recruitment purposes. As a follow-up, the risks of 3D printing used for terrorist purposes, such as the risk of creating untraceable, home-made weaponry, will be examined.

Finally, the aspect of artificial intelligence being a dual-use technology will be explored. The case studies of autonomous vehicles and deep fakes will be central to understanding both beneficial and nefarious uses of AI. After establishing a background on each, the report will proceed to highlight the environmental and social benefits of autonomous vehicles, while also highlighting the risk of them being hacked and becoming a physical danger to drivers and communities through turning a tool for organised crime or terrorist organisations. Equally, deep fakes will also benefit from an analysis into their impact on education and disinformation alike. The report will conclude with a number of recommendations on how to counteract these threats.

Alan Lis – Director of Analysis and Project Coordination at the Institute of New Europe. Graduate of two British universities: University of York (BA in Politics with International Rela tions) and University of Warwick (MA in International Security). Erasmus student at the University of Bergen, Norway. His previous professional experience includes, amongst others, working for the the Department of Strategic Studies of the Chancellery o f the Prime Minister of Poland and Euractiv.pl. Participant of the ‘School of Leadership ‘course run by the Warsaw-based Instytut Wolności. His main research interests are international security, terrorism, and hybrid threats.

Aleksander Ksawery Olech – Director of the European Security Programme at the Institute of New Europe. Specialist in the field of security and international relations. PhD candidate in security sciences at the War Studies University in Warsaw. He gained research experience at the Université Jean Moulin III in Lyon, the Institute of International Relations in Prague, and the Institute of Peace Support and Conflict Management in Vienna. Scholarship holder of the OSCE & UNODA Peace and Security Program and of the Casimir Pulaski Foundation. His main research interests are terrorism, international cooperation for security in Eastern Europe and the role of NATO and the EU in the environment of hybrid threats.

IF YOU VALUE THE INSTITUTE OF NEW EUROPE’S WORK, BECOME ONE OF ITS DONORS!

Funds received will allow us to finance further publications.

You can contribute by making donations to INE’s bank account:

Alan Lis Analyst. Graduate of two British universities: University of York (BA in Politics with International Relations) and University of Warwick (MA in International Security). Erasmus student at the University of Bergen, Norway. Obtained experience in international affairs and conducting research, amongst others, in the Department of Strategic Studies of the Chancellery of the Prime Minister of Poland and EURACTIV.pl.